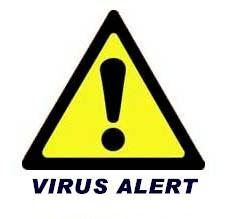 A few days ago, a long-time friend sent me a picture via Facebook chat. Since I know the man well, I clicked on the picture without any reservations. Nothing happened, so I clicked it again and again, but still the image was not displayed.


Moments later I received a message from Jess asking me what kind of picture I had sent her. She stated “Since we don’t usually chat on Facebook or exchange pictures, I’m a little suspicious.” I commented back that I hadn’t sent Jess any picture.


A string of comments followed. Some Facebook friends were nice and polite about the shared picture, others were rude and even defriended me.


Facebook got wind of this virus, restricted me of using certain features (such as sharing posts) and offered to help by way of a virus cleaning program. I ran the program, but nothing happened. I ran it again and again, but still no luck.


In the end it took Malware Bytes Anti-Malware to clean my computer system.


Still, every day I’m getting emails from people asking me about the shared picture. So, should you get a picture ‘from me’, without any explanation, for heaven’s sake DO NOT CLICK ON IT!!!

Posted by Conny at 10:18 AM No comments: Links to this post 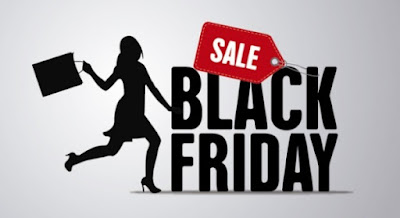 Intrepid souls all over north America, and perhaps elsewhere too, are whipping out their credit cards and heading to the stores for Black Friday bargains.

Others, who prefer to do their shopping online, fire up their computers and prepare for a day of Internet surfing, looking for deals.

I won’t be doing either.

It started out so innocently. I had noticed a red swelling on my leg (where the leg meets the tummy) on Monday. I assumed it was some sort of an insect bite and that it would go away in due time.

This was not the case. If anything the swelling got bigger and became rather painful. So painful in fact that I had to cut my underwear as the elasticized material was too tight around the leg where the swelling was.

Yesterday, I decided I couldn’t wait any longer. Not only had the swelling grown from the size of a blueberry to a cherry, I couldn’t keep cutting my underwear.

The doctor diagnosed the red swelling as a boil, a giant boil. He suggested antibiotics or opening the boil to drain the blood and pus. He was going to give the affected area a local anesthetic, but he said and I quote “I’m not gonna sugarcoat it, it’s gonna hurt.”

He was right. When the needle entered the skin it was just a tiny pinprick, but as soon as he started injecting the freezing liquid it felt like the boil caught fire.

The surgery itself was painless, although more complicated than the doctor had anticipated. He had to cut three times. Eventually, he had to give up because he said he couldn’t cut any deeper because he might hit an artery.

He said that by Sunday the boil should be better, if not I will have to take antibiotics (which I rather not). He advised me to apply warm compresses every two to three hours and stay off my feet.

“So no Black Friday shopping,” I asked him.
“Better not,” he said, “put up your feet and rest.”

This ruined my plans for early Christmas shopping. I was gonna go to the mall, and even though dealing with a crowd of shoppers would be hell, I was prepared to put up with it for the sake of finding some bargains.

If I couldn’t walk the stores, I figured I might as well join the Internet shoppers and go online. Not that that worked out well. Not only did I get for all selected items the message “May arrive after Christmas”, the shipping and handling charges were outrages.

I was about to give up when I found an email in my inbox that a particular website offered 75% off on over 10,000 items. I clicked to check it out, only to be disappointed again.

So I gave up and my Christmas shopping will have to wait until December. With any luck, the stores in the mall will have Christmas specials. And yes, dragging my purchases home won’t be easy, but it will be cheaper than the shipping charges.

Posted by Conny at 10:15 AM No comments: Links to this post

Just the other day I warned that pet owners should think before they buy a cat toy. But but I don’t exactly practice what I preach. http://connymanero.weebly.com/blog/cat-toys-think-before-you-buy

It all started with Holly licking her bum. Not once, not twice, but constantly.

When I had a look I noticed that her backside was rather dirty, and the skin around her anus red and swollen. With Dieter’s help, her bum got rinsed with clean lukewarm water. A few days later we repeated the process.

However, that was not the end of it. The vet said that Holly was overweight. This was not news to us, we knew Holly is on the heavy side, but we didn’t know what to do about it. She eats a normal amount of food and gets daily exercise.

It sounded like the perfect plan to me and I wasted no time getting Holly (and the rest of my cat family) not one but two such balls. The balls were filled with nibbles, placed on the floor and introduced to the cats. 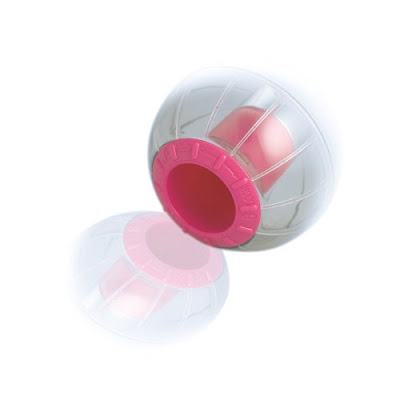 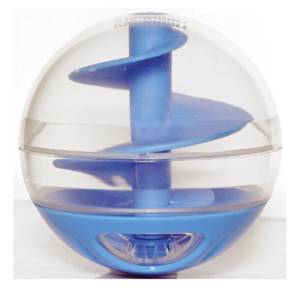 And what do you think? If you think Mickey, Charlotte, Gabriel and Holly enthusiastically started slapping the ball around, think again. They looked at it, sniffed it and … ran away. And I do mean ‘ran’, they didn’t just walk, they backed away and took off like bats from hell.

Not wanting to give up that easily, I decided to demonstrate to the cats how to use the ball, and what their reward would be, but no, they wanted nothing to do it. I placed the two balls in two different locations, but wherever the ball was, they walked around it in a big circle. Eventually, I had no choice but to fill their regular food bowl with nibbles.

If anyone bought this ball for their cats, whether it’s a failure or a success, please share your experience with me.

Posted by Conny at 9:16 AM No comments: Links to this post

Spiders are only good for one thing … 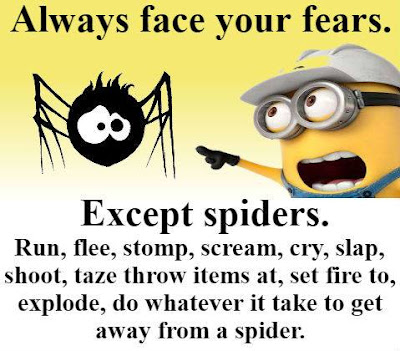 People are weird. I’ve said it a number of times and with each passing day I’m becoming more and more convinced of it.

Have you heard the latest? A woman in Australia has rescued a spider and called it Charlotte. Yes, you read that right, she RESCUED a SPIDER!!!

Now I’m all for rescuing animals such as cats, dogs, bunnies, wolves, foxes, even certain types of birds and fish, but I draw the line at spiders. In my opinion spiders are only good for one thing … to be killed and judging by the poster above, women and men all over the world agree with me.

As for the Australian spider … it was found in a barn and according to a CNN news report the monster sports 15-inch legs – that’s 38 cm for my European readers.

I saw a picture of it, and I’m telling you, if I was to come across a spider that big, I WOULD HAVE TO BE RESCUED!

It was Dieter who told me about this particular rescue. If you think I looked up the news article online, think again. Being confronted with a spider, big or small, on my computer screen is enough for me to scream, throw my laptop away from me, and go running. I would probably survive, but my laptop might not.

While at first I wanted nothing to do with the Australian rescue, after a while my curiosity got the better of me. Being too chicken to look for the CNN article myself, I asked Dieter to do it for me. He had already seen the spider, so its size would come as no surprise to him.

While he searched on his laptop, I put some distance between myself on his computer. If I was going to see a huge spider, I wanted to do so from a few feet away. When he found the particular article he asked if I was ready and then turned the screen of the laptop toward me. And eeeeeew what a beast it was. I couldn’t imagine anyone rescuing something like that, much less a woman.

Two weeks ago, when I first shared the poster above on Facebook with friends, Andrew (not his real name) commented that spiders shouldn’t be killed, but captured and set free. He suggested getting a glass and a piece of paper. To put the glass over the spider, slide the paper between the wall, floor or ceiling, thus trapping the spider and then take it outside.

When I read that I shivered all over. Me … putting a glass over a spider and holding it in my hand to take it outside … no way, not for a million dollars. And I mean that, if someone was to offer me big money to rescue a spider I would never get to enjoy it as I would suffer a heart attack in the process. Not a hair on my head actually considers doing such a thing.

Yet another friend, let’s called her Maureen, send me a video of a contraption to capture a spider and set it free again. The contraption looks a little like a dishwashing brush. The plan is to open the brush, put it over the spider (effectively capturing it between the bristles), closing the brush and then releasing the spider in the yard.

With all due respect Maureen, you can keep this contraption. I have NO intention of EVER using it. No way am I going to capture a spider between those bristles, walk with the monster less than 8 inches away from me, and releasing it, free to scare the bejeezus out of someone else.

Besides, even if I was brave enough to capture a spider, what would I do with it? I live on the 11th floor of a condo building … would I drop the spider off the balcony? If I did there would be three possibilities:

1. The spider would land in the grass below and run away

2. It would hurt one of its eight legs, be unable to move and die a slow death

3. Catch a strong gush of wind while being dropped and land on a balcony below mine

Just imagine if it was to land ON someone. The poor man, woman or child might scream and suffer a heart attack.

No, I’m much more in favor of what an Australian friend did. She recently felled a tree, a couple of spiders as such became homeless and went running in her yard. Amanda (not her real name) didn’t think twice. She sprinted to her barn, grabbed a pitchfork, ran back to where the spiders were, raised the pitchfork a few times and killed the lot of them (or as many as she could hit).

Me and spiders … we are sworn enemies.

Posted by Conny at 11:07 AM No comments: Links to this post