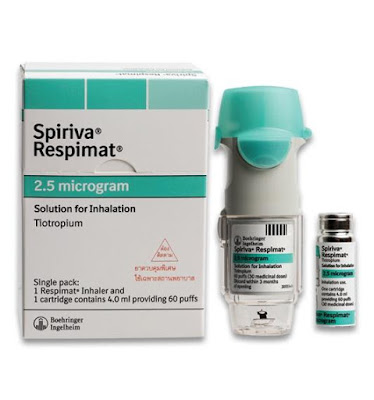 For those who have been following my illness and recovery ... I’m slowly, ever so slowly getting better. While there was a time that I could hardly brush my teeth and wash my face, I can now shower, wash my hair (when needed) followed by teeth brushing and facial cleansing.

I won’t say that I’m okay, far from it, but I can feel an improvement. Part of this recovery may or may not be due to a puffer the lung specialist prescribed.

When he mentioned this puffer to me to improve my breathing, I was all for it and let Dieter pick up the medicine from the pharmacy. The cost was nothing to sneeze at ... $79, from which I won’t get a cent back because I don’t have medical insurance.

Once I had the medicine, I started reading the accompanying pamphlet and got scared ... there were so many possible side effects. By treating my labored breathing, I stood the chance of something far more serious. Just look at the list:

So, what I do is, I spray the mist from the puffer into the air and inhale it from there. I don’t get the full dosage, but that doesn’t bother me. I have the constitution of a child anyway. Fact is, I’m getting better, so I’ll just keep doing what I’m doing.

In addition, I’m going to try something natural. I’ve read online that garlic is good for the lungs. One of the recipes is to crush a clove of garlic, put it in water and drink the water. Since I’m not a vampire, I’m gonna give that a shot.
Posted by Conny at 10:13 AM No comments: Links to this post 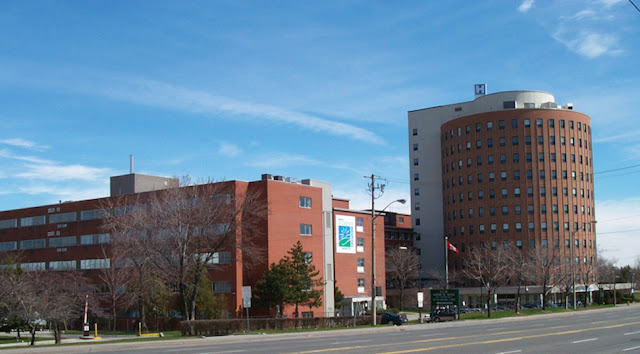 Yesterday I related my experiences at the Scarborough General Hospital after fluid was detected in my lungs and the draining process. Today I would like to go into a bit more detail regarding the services of the hospital and other details.

As I mentioned, the first time I went to the emergency room the nurse who treated me was sympathetic and immediately let me go through for treatment. The second time I was at the emergency room, the nurse clearly didn’t give a damn even though I was in obvious distress with breathing.

The process of inserting the draining tubes in my lungs I can only describe as torture. The technician didn’t wait long enough for the local anesthetic to kick in and subjected me to unnecessary pain. Just look at the holes that were made in my skin ... do you think that tickled? 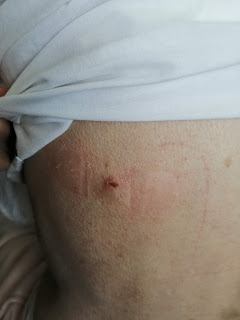 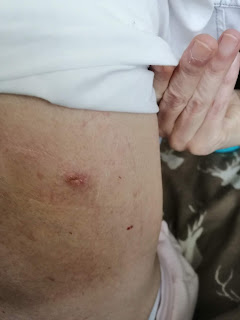 I came to the hospital because I had trouble breathing, a discomfort that grew worse and worse after the lung-drain technician punctured my lung and part of my lung collapsed. I rang for a nurse, but other than being given oxygen, it took at least an hour before real action was taken.

All in all, I was in one of the treatment rooms from 11:00 a.m. to 1:30 a.m. Not having eaten since breakfast, I was ravenous and kept asking for some food, which was either ignored or forgotten.

Eventually, a nurse brought me half a tired looking sandwich with roast beef and some water. The sandwich tasted horrible, but because I was so hungry I nibbled my way through it anyway.

When I was taken to my room, I found an unmade bed. There was an undersheet and a protective mat, but other than that nothing. In the four days that I was in the hospital, not once were the sheets changed.

As for the food ... delicious. Breakfast, lunch, and dinner was really something to look forward to. Every day something different, beautifully presented and really tasty.

As for my roommates ... two of them were nice and friendly people, but the fourth one was my worst nightmare. I guess her to be in her 80s with excess phlegm in her lungs and throat. Every hour this phlegm had to be removed via suction, a process that sounded truly disgusting. In-between treatments she was sleeping and snoring and if there’s one thing that drives me nuts, it’s snoring. Snoring made even worse with all that phlegm rustling around in her throat. So, the whole day I sat with headphones on, listening to music and videos to draw out that sickening noise.

As for the nights ... I knew that I wouldn’t get a wink of sleep having to listen to that snoring, so since I couldn’t get another room, I asked the nurse if my bed could be moved. This was indeed possible. My bed was moved to the nurse's station. The place was not as dark as a room, and it was rather noisy, but that didn’t bother me at all. As long as I didn’t have to listen to the snoring woman I was happy and slept like a baby.

In addition to the problem with my lungs, there was a problem with my blood pressure. According to the doctor, it was too low and so he instructed the nurses to give me one IV-bag after another. After 24 hours I noticed that my feet had swollen to the size of little elephant paws. Treatment had to be stopped immediately.

At last, came the day that I was discharged from the hospital. Well, technically, I discharged myself. The doctor wanted to keep me for another day, but I had enough.

For whatever happens next, I don’t think I will go back to the Scarborough General Hospital. The food was great, but the service sucked.

Posted by Conny at 7:23 PM No comments: Links to this post Even though a multitude of New Years wishes included good health, 2019 was not off to a great start for me. In the second week of January I got sick, a bug I was told, a bug was going around Toronto. I was not in the least surprised that this bug had found me. I’m always a welcoming host for whatever goes around.

When it got worse in the second week I still wasn’t worried, but when it goes worse still in the third week I thought it was time to consult a doctor. However, there was a problem ... my family doctor has her office downtown and I was in no fit state to travel. So, I called ‘Doctors making house calls.’

The doctor who showed up and examined me diagnosed me with pneumonia. She prescribed antibiotics and even though I had mentioned that I am allergic to penicillin, the drugs she prescribed contained penicillin.

To get suitable antibiotics another doctor from ‘Doctors making house calls’ was summoned. He said I didn’t need antibiotics as there was nothing wrong with me, I just had a simple cold. When things got worse still, I made my way to a walk-in clinic where I finally got safe antibiotics and since I was short of breath, a puffer to help me breathe. If I wasn’t feeling any better at the completion of the antibiotics course, I was to make my way to the hospital for tests.

I didn’t get any better, and so last Friday I took a cab to the Scarborough General Hospital. As soon as I mentioned shortness of breath, the nurse let me through and I was taken to an examination room. The attending doctor suspected fluid in the lungs. Since it was late Friday, nothing would be done, but he suggested that I check into the hospital to get immediate service on Monday. Staying at the hospital over the weekend didn’t appeal to me, so I checked out and promised to come back on Monday.

When I came back on Monday, the emergency room was packed with people. When I mentioned to the nurse that I couldn’t breathe, she didn’t seem to care, just told me to take a seat and wait my turn. Two hours passed, 15 patients were still ahead of me ... I decided to call it quits.

The next day things got so bad that I called 911 and was taken to hospital by ambulance. To cut a long story short, an X-ray was taken of my chest, followed by a CT-scan, and it was confirmed that I had indeed fluid in my lungs. Hence the shortness of breath. The fluid would need to be drained.

The preparation for the draining procedure I can describe as nothing less than torture. Even though I received a local anesthetic, I felt everything. The needle that went into the left side of my back, the 1 mm thick tube that followed and everything else that went on back there. I moaned and growled with pain and at one point nearly passed out. By the time the left side was done, I was terrified for the right-hand side. Fortunately, that went a lot better. The anesthetic had more time to work and even though I still felt pain, it wasn’t as excruciating as the left-hand side.
The pain wasn’t over yet though, with two thick tubes in my back, it was nearly impossible to get comfortable. 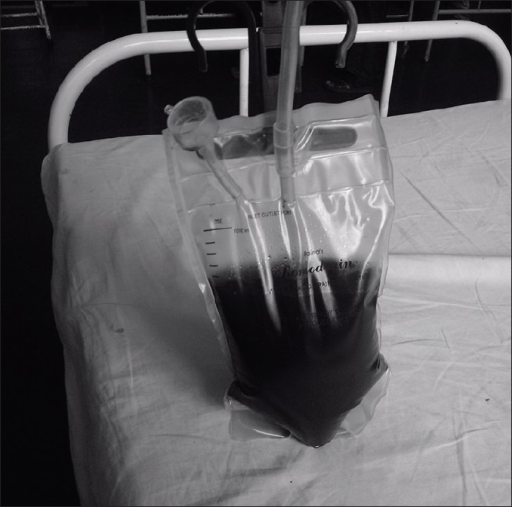 In fact, it was swollen like a balloon. Within no time I couldn’t breathe anymore, I started to panic, and even though I was given oxygen and told to take deep breaths, I was like a fish a dry land. A nurse was summoned, she called for a doctor, who in turn ordered an X-ray. It turned out that the technician who had inserted the tubes had punctured my lung and now part of my lung had collapsed.

During my four-day hospital stay, an X-ray was taken of my lungs every day to monitor the healing of the lung. By Friday the hole had been reduced from 5 cm to 2 cm. According to the doctor, I should stay one more day in the hospital, but I had enough, I wanted to go home. To the best of my knowledge, people heal better in their own environment.

Before leaving the hospital, the doctor removed the tubes in my back and I was quite surprised to see the apparatus. I thought it was just a simple plastic tube, but that was not the case. This is what I saw ... 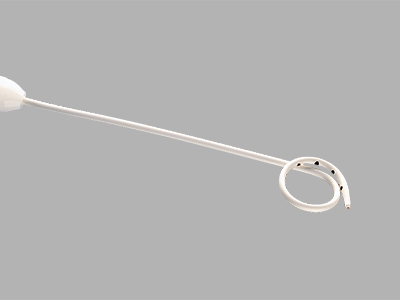 No wonder I had been in so much pain.

My hospital stay had some positive aspects too though. Every day my son brought me a cup of Tim Horton's coffee with a few of their delicious cookies and he brought me flowers. 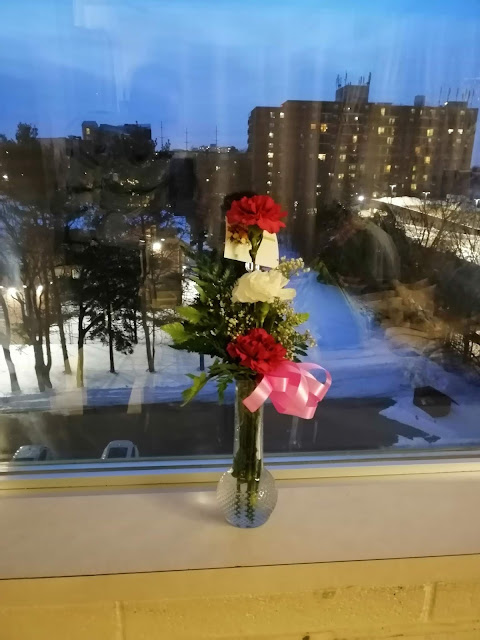 So now I'm home, home sweet home, and although I am better, I am far from 100%. Everything I do exhausts me. I can’t wait to get better so I can do all the things I did before: cleaning, cooking, going for a walk, not to mention ... bowling. When I return to the bowling alley, there probably will be cobwebs in the holes of my ball.

Posted by Conny at 2:07 PM No comments: Links to this post