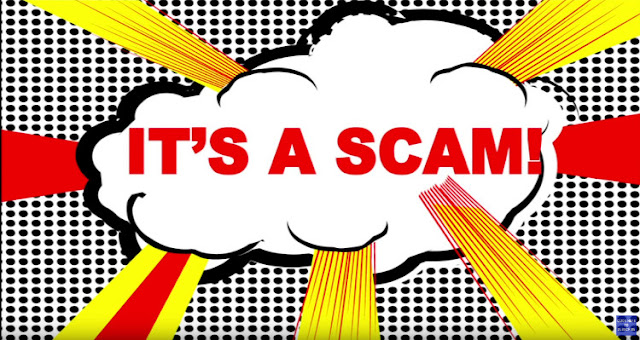 You probably pride yourself on being smart, but how smart are you really? Can you spot a scam?

Yesterday, I was approached by Gloria Allendorfer-Anderson on Facebook who told me that she was awarded a grant of $50,000 and that I might be eligible too. All I had to do was get in touch with Elizabeth Ray (email elizabethray938@gmail.com)

Just for fun I sent Elizabeth an email and of course she let me know that I was eligible for a $50,000 grant too. I knew right away that I was dealing with a scam artist, but I decided to have some fun with her.

When she asked for my name, address, phone number and monthly income I gave her bogus information and when she wanted to know whether I wanted the $50,000 in cash or with a cheque, I opted for a cheque.

Then came the kicker … in order for the money to be delivered to me by UPS she wanted $1,000. Yeah, right, like I was going to send a complete stranger that much money.

I played along and said that I would send her the money. She suggested that I go to Walgreens or a CVS store. When I told her that no such store is in my neighborhood, she suggested I transfer the money via Western Union.

I suggested that I pay her directly to her bank account, but she was having none of that. If she gave me that information, it would be very easy for the police to track her down.

Not that tracking her down is much of a problem for those who know how. With her I.P. address they have her in a matter of minutes if not seconds.

This kind of scam, or shall I say all kinds of deceit makes me mad though. Generally, people work hard for their money and then a scam artist like Elizabeth Ray comes along and steals folks' hard earned cash. She herself probably probably never has done a day's work. She spends her time sending people emails and hoping that they fall for her scam. If only five people a day believe her nonsense, that's $5,000 for a few hours of 'work'.

I might not have a Harvard degree, but I’m smart enough to spot a scam a mile away. Unfortunately, scammers are smart too.

In the case of Elizabeth Ray, she will change her name and her email address and bamboozle who knows how many more people.
In conclusion … be wary of Elizabeth Ray and her partner in crime Gloria Allendorfer-Anderson, they might even be one and the same person.

If you keep the following in mind, you should be safe:

And last but not least … if something seems too good to be true … it usually is.

Posted by Conny at 9:46 AM No comments: Links to this post

Day 164: Why is it so hard for self-published writers to accept advice? 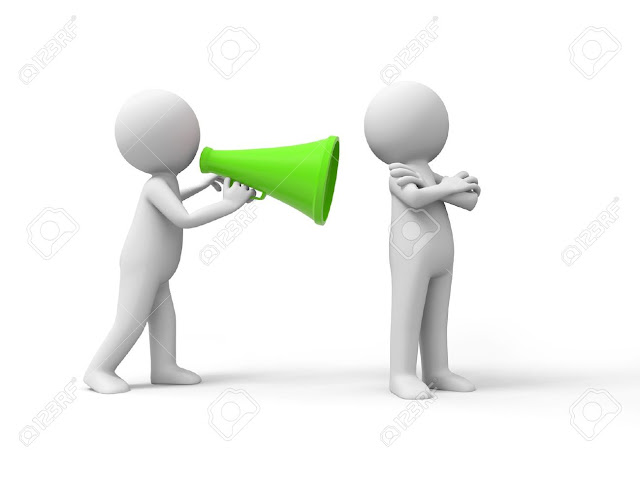 Just about every writer is familiar with John Grisham’s story. He wrote ‘A Time to Kill’ in 1988, when he couldn’t find a literary agent or publisher he self-published his work and sold the books from the booth of her car. In due time he was discovered and contracted by a mainstream publisher and … the rest is history.Ever since Grisham’s success everyone and his uncle has gotten it into their head to write a book too. But as Christopher Hitchens said “Everyone has a book in them, and that’s where it should stay.”Over the years it has transpired that some people have an obvious talent for telling stories, while others should have taken Hitchens words to heart and never put pen to paper (or their fingers to a keyboard).Not only do those people have no idea what writing is all about, but their spelling and grammar is so atrocious that their writing efforts become laughable.I recently came across one such individual (lets call her Lesley) and while I tried to remain polite, she lashed out at me with vitriolic expressions. Other than her hurtful words she stated that unlike me she was not raised in the English language.I had news for Lesley; my mother tongue isn’t English either. I was born and raised in Belgium and I didn’t learn English at school but from TV, watching Dallas, Dynasty and other shows. Around the same time, I started buying English newspapers and magazines, thus learning the spelling and grammar of this new language.Later still, I joined a writing site, and met a lady who lived in Las Vegas. We started corresponding and she offered to edit my articles before sending them to the publisher. As it turned out, my English wasn’t as good as I thought it was. She pointed out spelling mistakes such as: there/their – advice/advise – affect/effect – bear/bare – stationery/stationary – isle/aisle, etc.If I had been like Lesley I might never have learned the finer points of the English language. I didn’t take offence when she corrected me, on the contrary, I appreciate the help and made notes.Some will say that it doesn’t matter how a story is written. If the publisher sees dollar signs he will give the manuscript to an editor who will work his magic on it. Just look at ’50 Shades of … rubbish’. A worse story was never written, but the author had contacts in the publishing industry and whoever took on the project knew that the book would sell because … sex sells.Anyway, back to Lesley … I had a look at her profile on Facebook and is it turns out, Lesley isn’t even a writer. She joined several writing sites on Facebook without any credentials. She hasn’t written a book, she hasn’t even written a story. Judging by her profile her aim is to sell merchandise and to find a boyfriend.All her profile consists of are selfies in various poses in various stages of undress. Not that Lesley is a beauty, she’s quite ordinary looking is not a little slutty.Anyway, I tried to help her, but my help was not wanted. Which is strange because, open any mainstream published book and you will find a section where the author profusely thanks the editor for his/her help. If respected authors can accept help, why can’t self-published writers?
Posted by Conny at 9:43 AM No comments: Links to this post

Day 163: Be careful what you wish for 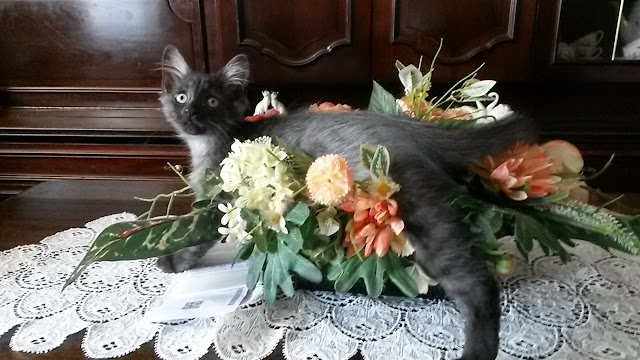 Day 163: Be careful what you wish for

Many years ago, I asked a Ragdoll forum member if this breed of cats can ‘talk’. “Can they talk,” she replied, “The question is, do they ever shut up!”

Once I had a Ragdoll myself, a rescue we named Gabriel, I was somewhat disappointed that he was a rather quiet cat. Occasionally he would utter a meow, but on the whole Gabriel was too laid back to make a fuss about anything. 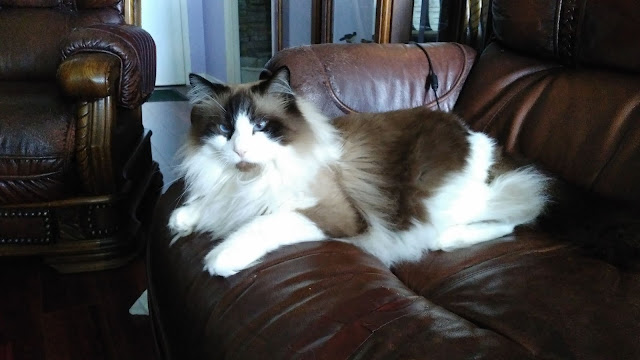 A few months after Gabriel passed away, we adopted two more rescues, Halley and Greyson. I hoped and wished that one or both would be ‘talkers’, but for months they remained tight lipped.

Overnight that changed when Greyson found his voice. For the longest time he was a quiet little kitty cat, but no more. Ever since he found out that he can produce a sound, he's been talking non-stop. He cries for food, he cries for attention, he cries when he can't find one of his toys, he cries for everything.

And he's got different kinds of cries. Food has one cry, for attention has another cry, and when he can’t find his spring or toy mouse that’s another cry still. If you were to hear his cry for attention you would agree … it can melt a stone heart. Yes, it’s that pitiful.

In case you’re wondering why he cries for food … I have no idea. Greyson, along with the others get breakfast, for during the day they have dry nibbles, and around 7:00 p.m. they get their dinner. So they never go hungry and there’s really no need to cry.

Neither is there reason to cry for attention, as Charlotte, Holly, Halley and Greyson get plenty of pets and kisses. 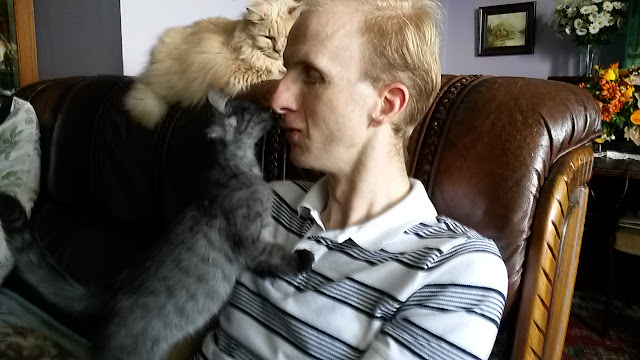 The thing is, when I’m peeling potatoes, Greyson wants to see what I’m doing. If Dieter is doing dishes, he wants to inspect the works, and when the beds are being made, Greyson makes sure the wrinkles are smoothed out (every cat lover will know what I mean by that). If Greyson is kept out of the loop, he cries.

As for crying if he can’t find one of his toys … well , that’s a different story altogether. Greyson’s favorite toy is a spring. When we first adopted him, Jackie (his foster mother) send him off with a packet of 10 springs, we bought an additional packet and later on another packet. That’s 30 springs altogether and he systematically lost them all. He knocks them under chairs, under the washing machine, the fridge, a cabinet … you name it. Every now and then when we clean under the sofa we find a few of those springs, but things are a little more difficult when retrieving them from under the fridge or the washing machine, those things are heavy. 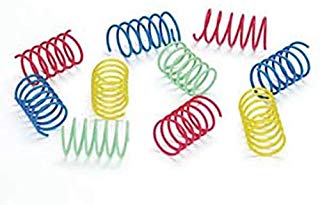 Greyson knows this, where he put his springs I mean, not that the machines are heavy, and wants us to lend him a hand in getting them back. When we tell him no, or that we can’t do it, that’s when the crying starts. So what do I do … no, I don’t move the fridge or washing machine, I’m not Wonder Woman, I go on Amazon and order new springs.

Just goes to show, I wanted a talkative cat and now that I have one ...

Posted by Conny at 12:59 PM No comments: Links to this post