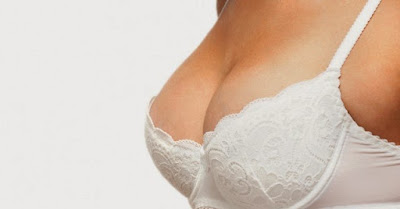 For the past few days, I’ve been avoiding the homepage of Facebook. Lately, there always seems to be something in the news or a post of a member that tick me off. Since I have to cut down on stress I decided to avoid Facebook.

Unfortunately, while checking Facebook’s home page to see if any of my friends have birthdays, I noticed a post of a woman who stated that she was having her boobage squashed. She was referring to a mammogram.

Her word usage ruffled my feathers. Why couldn’t she just say “I’m having a mammogram” or if she had to be graphic “I’m having my breasts squashed”. Why call breasts boobage?

It ticks me off when grown women use words such as boobage, boobies, etc. Are they women or are they big children who don’t dare to use the word breasts?

It makes me wonder how they refer to their husband’s penis. Do they call the organ a pippi? And what kind of a name do they assign to their vagina?

I was silly enough to join the conversation and stumbled across some disturbing statements. Trying to help I put in my two cents, but this was not well received.

After leaving the conversation I did some research and found that on the subjects of mammograms medical opinions are divided. Some doctors are in favor of mammograms as it is a way for early breast cancer detection, others consider the risk of radiation too high and advice to avoid mammograms.

As a general rule, women between the ages of 35 and 50 should have a mammogram once a year, while women over the age of 50 every two years. If a woman has concerns between mammograms, she can have a manual exam or an ultrasound.

If a lump gets detected, standard procedure is to do a biopsy. Three samples are removed from the lump, send to the lab and within a matter of days, the results show whether the lump is benign or malignant.

While mammograms do expose patients to a certain amount of radiation, early breast cancer detection is key for survival. So every woman should decide for herself … will she have an annual mammogram and have the benefit of catching a cancerous lump early, when treatment is simple, and live; or avoid the exam and risk that by the time a cancerous lump is found, it’s too late to do something about it.

I don't know what ticks me off more, women who use baby talk or women who stick their heads in the sand.

Posted by Conny at 9:33 PM No comments: Links to this post

Nearly run over and yelled at 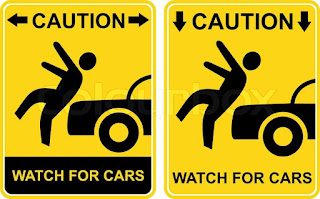 When I first started to drive a car, my dad told me that avoiding accidents not only depended on my safe driving, but also on keeping my wits about me and foreseeing mistakes other drivers were about to make.

As it turns out, it’s not only important for a driver of a car to stay alert, the same goes for a pedestrian. Take Saturday morning for instance, when I was nearly knocked down by a car not once but three times and yelled at in the process.

The first time was in parking lot, where a car reversed out of a parking bay. I guess a Mercedes doesn’t come equipped with a rearview mirror, or those driving a Mercedes think they are lord and master of the road.
Not only did the driver not apologize for nearly bumping me out of the way, she had the nerve to yell at me that I should watch out where I was going.

A short distance further an SUV was blocking the pedestrian path by a gas station. While he waited to slip into traffic, I went around the car to continue my walk. At the very moment that I was behind the SUV, the driver decided to reverse. Once again I was able to jump out of his way. This driver too yelled at me for being careless.

A little further still, I waited for the traffic lights to turn green before crossed the street. When it did, and I stepped off the curb, a car nearly ran me over and I got yelled at for a third time.

Correct me if I’m wrong, but shouldn’t drivers be on the lookout for pedestrians? Isn’t that why all cars come equipped with rearview and side mirrors? And since when is it no longer safe for pedestrians to cross the street when the traffic light is green?

I guess it’s true what they say about traffic lights and their meaning: red … stop, green … go, orange … go like hell.

Posted by Conny at 11:32 AM No comments: Links to this post

Light up or shut up! 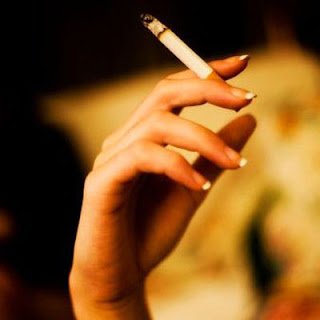 What is it with people writing the biggest nonsense on Facebook? I can understand that people post an announcement, something good, something bad, something funny or share pictures of events, pets, or kids. But some people write nonsense such as “Went for a walk”, “I’m waiting for the bus”, or “My neighbors just came home”. Who gives a crap?

Earlier today I read a post of someone who said ... I want a smoke so badly”. Apparently, this person gave up smoking two months ago and now she’s having cravings. A string of comments followed. Naturally, I wondered … how does posting this on Facebook help with a craving. Does writing this post help to make the craving go away? Does reading the comments make it any better? If you really need help, call the hotline for quitters.

Everyone is apparently so supportive of those who quit smoking, but what they don’t say is how they replaced one addiction with another. I know quite a few quitters and they literally don’t stop stuffing their faces with everything they can get their hands on. Hence the enormous weight gain.

Quitters don’t want others to know this. They stand on their pedestal and announce for all to hear that they quit smoking, but they hide the fact that from morning ‘till night they eat, eat, eat. And if you think they snack on celery sticks and carrots, think again. They snack on sweets, chocolates, potato chips, pretzels … they become addicted to junk food. They don’t share that with the world, though. No, they hide this little tidbit, otherwise, their ex-smoker halo would disappear.

So my message to ex-smokers … quit whining. LIGHT UP OR SHUT UP!

Posted by Conny at 3:10 PM No comments: Links to this post

A cure for insomnia? People who can’t sleep will try just about anything to catch those elusive zzzzzz’s. I should know, falling asleep is a major problem for me and over the years I’ve tried it all: chamomile tea, counting sheep, meditation, lavender oil, lavender mist … nothing helps.

So when I learned of a sound machine that produces relaxing sounds I thought I should look into it. I researched the machine online and found that sound machines come in various sizes and prize ranges. Nearly all of them come with the following:

In all honesty, I wasn’t crazy about any of these sounds.
Ocean waves, a babbling brook or rain or anything to do with water is out of the question as it’s only a matter of time before I have to go to the bathroom.

Thunder … no, thank you. I very much suspect that bolts of thunder will keep me awake rather than put me to sleep.

Since I didn’t know what white noise is I had to go and look it up. Apparently, white noise is celestial sounds. I looked, or rather listened to a video online and it sounded like the space shuttle taking off.

Eventually my research led me to relaxing music and that, by far, is the best choice. A word of caution though, during a time of depression this type of music should be avoided as it tends to make one rather melancholic.

Not only is relaxing music the better choice for me, it’s also more suitable for my cats. When I tried out various videos yesterday and clicked on ‘Bird songs’, Mickey, who had been sleeping, was instantly on high alert. 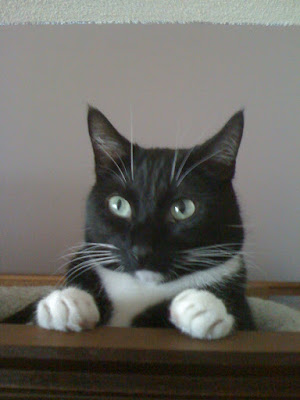 Posted by Conny at 11:45 AM No comments: Links to this post

I did, however, hear an appealing statement. I watched the movie “New Year’s Eve” on New Year’s Eve and there someone said ... “What would you do if you knew you wouldn’t fail?” … well, I knew what I would do, do you? I’m going to finish a manuscript. It’s been a year in the making, every day (or just about) I plan to write, but too many distractions get in the way. So, this year I plan on getting less distracted, write more and type the words “The End” on that manuscript.

Personally, I’m not the least bit sorry to see the end 2016. It was a bad year, the worst ever. Let me give you a quick run through …

Dieter (my son) was arrested for assaulting a subway station official. All that happened was that Dieter’s shoulder bumped into the guy’s shoulder, but he made a big deal about it and thus Dieter got arrested and charged.

Chanel, our 13-year-old cat got sick and was diagnosed with kidney disease. She was put on a special diet, she got a little better, but we knew she lived on borrowed time.

Chanel passed away, or as I like to think of it, crossed Rainbow Bridge.

Nothing happened, or if it did, I’ve forgotten.

The charges against Dieter were dropped. After the assault charges we went through months of anxiety and had to fork out $5,000 on a retainer fee for a lawyer, but when the case went to court, the subway station official had a change of heart of dropped the charges.

Also in May I had a bit of an accident. A tin of pineapple fell on my foot. It hurt like hell and it took weeks to heal but fortunately nothing was broken.

Shortly after an annual mammogram, I received a call that a lump was found in my right breast. More anxiety as I first had to wait for the biopsy and then the result of the lab. When I eventually got the results I was diagnosed with breast cancer.

I had surgery. The lump was cut out and some lymph nodes were removed to determine if the cancer had spread. Fortunately, that was not the case.

Charlotte had to be taken to the vet. She was diagnosed with a urinary tract infection. She got antibiotics and soon got better.

I started radiation. Every day, for 16 days, I had to go to the Princess Margaret hospital for treatment.

I finished the radiation treatment and was officially declared as a cancer survivor.

I developed a boil. It started out as something barely bigger than a pimple, but it grew to the size of a cherry. When it didn’t go away by itself as hoped I had to go see a doctor. He suggested antibiotics or surgery. Since I’m a big believer of cutting things out that don’t belong in a body, I opted for surgery. The doctor warned me that the anesthetic would be very painful. This sounded strange to me as an anesthetic usually don’t hurt, but in this case, it did. Holy crap did it hurt, it was like to boil caught fire. After that it was smooth sailing, the surgery was completely painless.

Also in November I lost two friends. The first due to a difference of opinion, the second after my Facebook account was hacked.

An uneventful month, just the way I like it.


And so now it’s January 1st. Do you wonder what the year has in store for us? All we can basically do is keep breathing in and out and hope for the best.

Posted by Conny at 10:03 AM No comments: Links to this post